FREE Worldwide Shipping 100% on ALL orders!

KILLER FROG LURES are designed to be fished on topwater. Some of the main target species such as snakehead and pike are solitary ambush predators which lie in wait for passing prey in and  around weed beds, under sunken trees or underwater rock formations and overhangs.

The hooks on our Killer Frog Lures are protected by a weed guard which means the angler can cast freely into those precise areas. Strikes from these ambush predators can be very sudden and violent causing loud splashes and many occasions fish exploding out of the waters surface altogether.

Other predators such as the large mouth bass and barramundi are more active in searching out prey and will hit lures on retrieve through open water. The noisy actions of the buzz blade and rattling sound of our Killer Frog Lures are soon noticed by these kind of predators.

Detailed below are some of the main target species that anglers around the world are currently casting Killer Frog Lures at with great success.

Species: Giant Snakehead.
(Channa micropeltes)
Kingdom:Animalia. Phylum:Chordata. Class:Actinopterygii. Order:Perciformes. Family:Channidae. Genus:Channa.
The Giant snakehead is an aggressive predator fish native to South East Asia. They will readily take topwater lures ending in explosive attacks, many times a fish will hit anything that lands in it’s territory. Giant Snakehead can grow to over a meter long and there is serious power in its bite so lures need to be tough. We recommend Killer Frog XL, Giant Toxic Toad or ,Walk The Frog. A specimen Channa micropeltes is a truly beautiful creature, often displaying a wide variety of stunning patterns of camouflage from stark contrasts of pure Black and White through shades of Blue, Purples and Greens to totally black slug looking fish with pure ivory colour bellies.

Species: Striped Snakehead.
(Channa striata)
Kingdom:Animalia. Phylum:Chordata. Class:Actinopterygii. Order:Perciformes. Family:Channidae. Genus:Channa.
Striped Snakehead is the common name but this fish is also known as Chevron snakehead, Snakehead murrel and Haruan in Malaysia. Channa striata can be found in ponds, streams and rivers although it prefers the stagnant and muddy waters of Swamps, flooded fields and plains. These snagged weedy conditions are perfect for throwing Large ,Small Killer Frogs, Poison Dart Frog, Banded Toxic Toad and Walk The Frog which come with weedguard for snag free fishing. Native of South East Asia and now introduced around the world due to its appeal as a food fish. 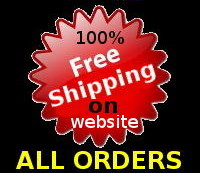 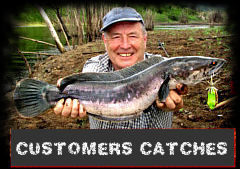 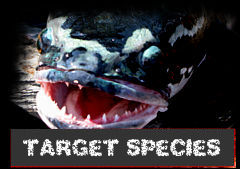